It’s July! Over half way through 2016, and it’s been a busy time.  Rebecca has launched a new book Dispatches from Continent Seven and Rhian has grown her engagement team for the Deep South National Science Challenge.

Rebecca’s new book Dispatches from Continent Seven: An Anthology of Antarctic Science was launched in March and is getting great r 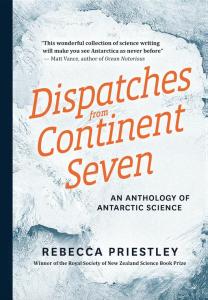 eviews.  Unlike most Antarctic anthologies, which focus on narratives written by explorers or writers, this book features accounts by scientists, including biologist George Murray Levick on the sexual habits of the Adélie Penguin, American geophysicist Robin Bell on the mountain ranges discovered beneath the Antarctic icecap, and Rhian’s own piece, Waiting for the Polar Sunrise, which she wrote based on her winter-over in Antarctica in 2002.

Rebecca talks about her book with Kim Hill on National radio and writes in more depth about her own Antarctic experiences on the Stuff news website.  You can also read an interview with Rebecca about Dispatches by Listener writer Mark Broatch. And because you wont want to share you can purchase your own copy from Awa Press.

Dispatches featured in Ice Science held at The Embassy in March as part of New Zealand Festival Writers’ week.  While Antarctica is a “continent for science” it has also inspired many artists, writers and poets. Te Radar hosted a panel discussion of Antarcticans – including Rebecca and Rhian – about what drives people to work, and sometimes risk their lives, in this most inhospitable of environments.

The Deep South National Science Challenge is a $24M programme with a mission to enable New Zealanders to “adapt, manage and thrive in a changing climate”. Rhian sits on the management team and leads one of five programmes – on Engagement. This is a major action research programme that will not only deliver a range of engagement activities and research outputs, but is also serving to redefine how engagement with science is conceptualised and delivered in New Zealand.

By far the most substantial work Rhian carried out in 2015 was development of an Engagement Strategy for the Deep South Challenge. This received very positive reviews from an Independent Science Panel, and Board approval in December 2015. This strategy led to $1.68M being committed to work-streams in broad and public engagement, tailored engagement, training and capacity building in engagement, and programme evaluation and is already being used as a resource by several other Science Challenges.

Rhian’s leadership of this Challenge’s engagement programme presents an exciting opportunity to set new precedents in public engagement with science (PES) in New Zealand. By creating opportunities both for funding and capacity building in public engagement, and by setting ambitious engagement objectives – for example that require co-production and evaluation – this programme is substantially bridging the gap between PES theory and practice while also delivering tangible, innovative, and measurable, initiatives that enable New Zealanders to make more informed decisions about climate change. The impact of this programme will therefore be demonstrated not only in publications, but also in the outcomes of the activities that it funds, and associated capacity-building of all involved.

In order to deliver this ambitious programme, Rhian has recently established a “Deep South Challenge Engagement Team” at Victoria University, which includes a Partnerships Director, Engagement Coordinator, and Evaluation Coordinator.

The new 300 level special topic: Antarctic Science and Culture has enjoyed its first semester as part of the SCIE course schedule and will be back in 2017. It may not be too late to enrol for Semester 2 courses in our programme.  But you better hurry!

SCIE212 Energy, Society and the Future

Our courses are also available as continuing / professional education:

SCIE212 Energy Society and the Future

Science R&R is run by Drs
Rebecca Priestley and Rhian Salmon, who form the core of the Science in Context group at
Victoria University. We will also be including guest contributions from colleagues, friends, and
students on our Science
Communication course.